High Definition Film Academy has unveiled its sixth edition of its reality TV show ”Script2screenAfrica2017”,with the theme “Film as a catalyst for revolution!”.

The reality TV show is scheduled to hold from July 1st to August 26, 2017, will host 60 Finalists, 12 Star actors and trail blazing filmmakers as mentors, 20 Short films on Social Justice, and climax with a premiere of the short films at the 2017 Script2ScreenAfrica Awards.

Registration for the 2017 Script2ScreenAfrica Reality TV Project is officially open today February 1, 2017 and will close March 31, 2017. Registrations are done online at the project’s website: www.s2safrica.com

Interested talents are also invited to Win a GOLD TICKET into the Script2ScreenAfrica House as a finalists, without going the registration and audition stages, by participating in one of the CHALLENGES, viz:MONOLOGUE Challenge, SCREENPLAY challenge, and 1 MINUTE FILMChallenge, guidelines are available on the script2screenAfrica website. 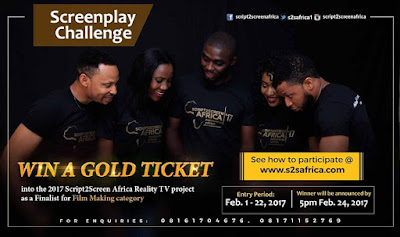